Our 8 green roof gardens, which host many plants native to BC...
Learn more

The Most Sustainable BMW Dealership in the World 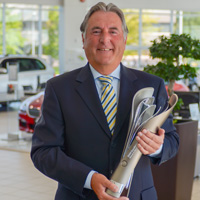 May 13, 2013, Richmond, B.C. – At this year’s prestigious BMW Sales Excellence Award Ceremony, situated at the iconic BMW Museum in Munich, Germany, “The Most Sustainable BMW Dealership in the World” title was given to Auto West BMW. This highly esteemed award recognizes dealerships worldwide who are paving the way for a greener future, while supporting BMW AG’s worldwide commitment to not only be the most innovative automotive manufacturer in the world, but also to tackle the fundamental issues relating to sustainability.

Auto West BMW opened their doors in 1986, however the history of this family-run business dates back to the late 60’s as the original importers of BMWs into Western Canada. After opening their new state-of-the-art dealership in 2007, Richmond-based Auto West BMW is now considered one of the top dealers in the world, while leading as the most sustainable one. Joachim Neumann, Founder and President of Auto West BMW and the Auto West Group, is devoted to promoting environmental awareness and sustainability through his dealership network. Neumann has confronted a wide range of modern challenges at the forefront of a growing ecological battle within the automotive industry. “This sustainability award plays a crucial role in promoting the principles of environmental responsibility to an industry that’s considered to be very wasteful,” says Neumann. He adds, “Auto West Group is committed to developing a greener environment for Canada – one project at a time.”

Auto West BMW has successfully embedded many fascinating sustainability features into their “DNA”, including:

A green roof concept consisting of 8 gardens with 2,200 plants in total. Maintained by Auto West BMW’s staff-led “Team Green”, this includes a community garden which grows vegetables that are donated back to the local food bank in Richmond. (Video: Green Roof Garden) 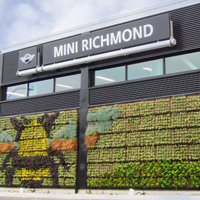 Auto West Group’s commitment to sustainability continues beyond BMW. In 2012, they opened the largest MINI dealership in Canada – MINI Richmond, who is also taking the sustainability lead in the automotive industry. With the installation of 168 rooftop solar panels, it is considered the largest solar panel installation on a dealership in Canada. In addition, a large exterior green wall was installed at MINI Richmond to reduce the temperature within the dealership, generate oxygen, and is perceived as outdoor public art with a honey bee design incorporated through selected flowers and plants.

Reclaimed storm water is also used in the washroom urinals and water closets to irrigate both the green wall and landscape. Furthermore, to meet the future demand of electric cars, a public EV charge station was recently installed in front of MINI Richmond, furthering Auto West Group’s commitment to support sustainability in their community.

In an effort to continue incorporating green technology within the Auto West Group and serve those who are urban e-motorists, Auto West BMW – one of only six dealerships in Canada with the eligibility to sell the BMW i franchise – is currently undergoing an expansion to accommodate the arrival of the BMW i3 and i8 models. This will also include the addition of public charging stations with the expected completion of the Auto West BMW i showroom in Fall 2013.

“We have made all of these investments without the expectation of an immediate financial return. This is about being good corporate citizens within our community by doing what is right for the environment, while also setting an example as a sustainable leader in the automotive marketplace,” says Pete Sargent, Project Manager for Auto West Group. 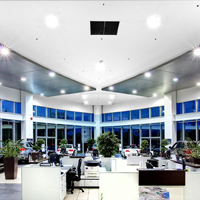 Auto West BMW: “The Most Sustainable BMW Dealership in the World”

Amidst the competitive automotive landscape, Auto West Group has maintained an edge and secured a significant, loyal customer base through their service levels, approach to business, and a deep appreciation for the brands they represent. At Auto West Group, we drive your automotive experience forward through passion, performance, and innovation.